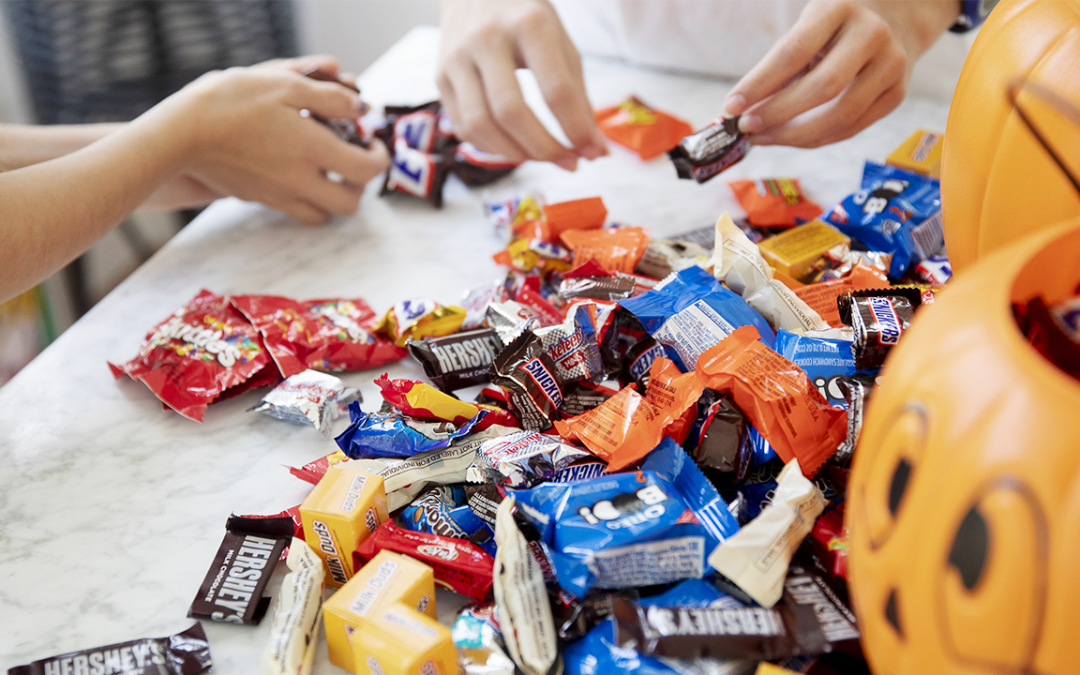 I am writing this entry on the morning following Halloween.  Several weeks ago we purchased a bag containing 260 individual packages of small sugary treats to give out on Halloween.  We recently moved to a neighborhood with a whole bunch of small children so we anticipated the doorbell would ring nonstop with costume clad youngsters.  Well, Halloween Monday was met with some rain showers and drizzle in the evening so our doorbell rang…only twice!  Of the 260 packets of Skittles, Mars, Three Musketeers and assorted other high-caloric/high sugar “treats” we were left “holding the bag” of about 240 remaining packets.

With transparency ruling the day in these entries, I must admit that last night I already broke into 2 bags of Skittles and 2 small Three Musketeers bars.  The remaining 230-plus packets now take up residence in our pantry.

In retrospect, we overbought the candy for the traditional Halloween giveaways.  Our neighbors told us that somewhere between 30-50 kids may show up, so even if we gave away 4 packets a piece, there was a good chance of having ½ of this huge candy bag left over.

The concept of “overbuying” often comes from growing up in a household where parents always stood by the adage that it is always better to have too much than too little.  At family gatherings, MUCH more food was prepared and offered up than there were people at the table.  Perhaps some of this line of thinking developed in our parents/grandparents generations when food was not so abundant and perhaps there was not enough food to go around.  Therefore, when resources allowed for it, there would always be a plethora of food present so no one would go hungry.

During a long-term weight control journey we all must be cognizant of “overbuying” the foods/desserts/snacks that derail our efforts to shed the weight.  If these food/snack sources are present in the house, readily available, there is a good chance we will devour them over time.  Another lesson we learned from our parents/grandparents is NOT to “waste” food.

As far as “left over “ candies, I am NOT bringing this into work as several of our team members are in a weight-conscious mode and I do not want to derail their efforts.  I will also NOT “donate” this to the troops as the military is kicking people out (before retirement benefits are reached) if their weight is not conforming with the set standards.  Childhood obesity, especially among poor socioeconomic communities is a huge health issue so sending the candy to needy children may not be the best idea either.   A monetary donation would be better.

So, what is the remaining option with those 230 candy packets?  Although my Grandma Sadie would turn over in her grave, we will throw them out.  In the garbage can, they cannot harm anyone.