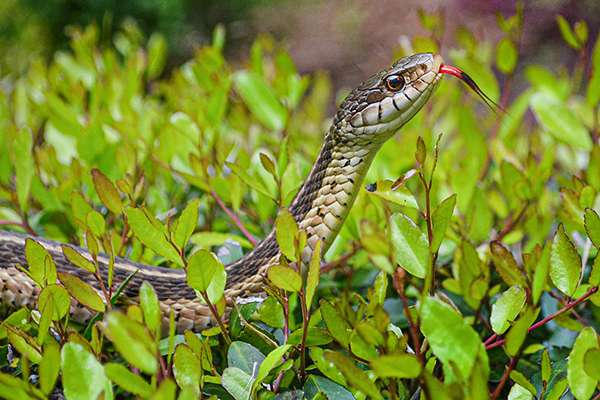 This entry was prompted by an experience Nataliya and I had today while walking the Mercer Park Trail.  We were doing our usual walk on the trail talking with each other and suddenly Nataliya let out a slight scream, grabbed by arm and pulled me to her side on the left.  We stopped and she pointed out a large copperhead snake that was in the right side of the woods slightly off the path.  This was a big, thick snake just hanging at its location.  If I had to take a guess of the odds of this snack slithering up quickly and putting a poisonous bite on either/both of us, the chances would probably be less than 1 out of 50,000.  Similar to lots of people, we both simply have a fear of snakes, despite knowing full well that the chances of being bit and dying/getting sick are very, very low.  Yet, the simple sight of that snake caused a very immediate and definitive action….getting far away quickly.

Let’s bring the concept of “fear” to another venue…flying.  Many people have “fear of flying” (actually, this should be renamed “fear of crashing”) and this will prompt those affected to simply not fly.  They will deprive themselves of distant vacations, produce many boring hours in a car and in many other ways, the fear of flying will cause actions to be taken.  In actuality, the chances of having serious injury/death from flying are very, very low.

Now, the to the weight control arena:  The risk of developing a life-altering disease/premature death from long-term weight control problems is high.  Eventually, chronically overweight/obese people will have little chance of NOT developing diabetes, cancer, chronic pain and other very bad outcomes.  However, the “fear factor” does not seem to be high, as 70% of our population remains overweight/obese, and clearly very few people take the fear of developing the aforementioned serious outcomes and use this to spring into action.

I am not suggesting that anyone reading this entry start living their lives in fear every waking moment about what travesty(s) their weight may cause to happen.  However, I do hope that the realization and knowledge of weight-related co-morbidities do produce a sort of “fear factor” that does motivate people to be diligent in their weight control activities.

Fear of snakes, fear of flying and fear of heights do not really have their bases in reality.  Fear of being bored by Posner’s blog and fear of weight-related co-morbidities are based on reality and should prompt action.  In the case of the blog, write comments, even if they are negative!