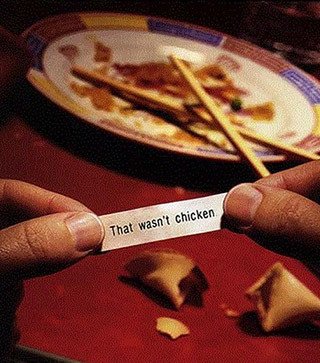 “Mystery Meat” is a disparaging term for meat products, typically ground,or otherwise processed , such as burger patties, chicken nuggets, Salisbury steaks or hot dogs that have an unidentifiable source  Most often the term is used in reference to food served in institutions such as cafeterias, prisons or an American public school lunch.

The term is also sometimes applied to meat products where the species from which the meat has come from is known, but the cuts of meat used are unknown. This is often the case when non-meat substitutes such as textured vegetable protein are used to stretch the meat to make it seem that the food source is 100% the type of meat advertised.

This entry was prompted by an article I read yesterday concerning the “testing” of tuna samples from several Subway franchises in California showing that no tuna could be found.  This comes on the heels of a previous lawsuit by a woman against the franchise accusing them of false advertising concerning their “tuna fish sandwiches” not containing actual tuna.  The recent testing of the “tuna’ from Subway was conducted by an independent laboratory.

Turning away from Subway and turning attention to the fast food burger places:  It has always been a running joke about what is actually in the burgers and chicken nuggets.  Clearly, at the price points they are sold at, there is no way are these food courses 100% pure meat or chicken.

The point:  During your long-term weight control journey it is best to stay away from “fast food” places of any type.  Taking the burger off the bun, having a salad with the prefab “chicken” or ordering a “tuna fish” dish from a sandwich franchise may seem like “good/healthy” choices but the bottom line is that we really do not know exactly what are in these food sources.  These, are in fact, “Mystery Meats and Fish”.

The growth of obesity in the U.S. over the past 40 years parallels the growth of fast food franchises in America.  I am not saying this is the only reason why the obesity epidemic has occurred but it is one of the reasons.