Where Is The Chicken? 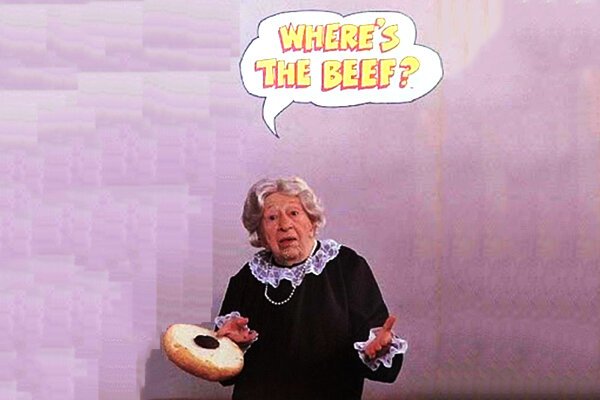 In 1984, the fast food hamburger franchise, Wendys, aired a commercial that resulted in a 30% increase in sales that year.  The commercial featured an older actress, Clara Pellar, and it showed three older women at the counter of another fast food burger joint being given a huge burger bun.  When they took off the top there was a miniscule burger with a pickle and ketchup on top that didn’t even cover an 1/8th of the bun.  Clara Pellar starts demanding: “Where’s the beef?   Where’s the beef?”  Wendys was trying to point out that their burger was much bigger in size than their major competitors, McDonalds and Burger King.

I had a patient tell me last week that she carries a food scale around with her.  She is taking the program very seriously and wants to ensure that when she is out, her exchanges are being counted in an exact manner so she can reach the quantity recommended in Phase 1 of our program.  The patient told me that one day she went to Panera, ordered some sort of chicken salad and additionally, paid an extra $3 bucks for “double chicken”.  When the dish arrives, she separated the chicken out, placed it on the food scale and guess what?  The total ounces of the “double” chicken order was 2.5 ounces.  Really?  This was double?  Does that imply that a regular order will have 1.25 ounces of protein?

When we are at more “fine food” restaurants and not ordering food off an assembly line, such as Panera, Chipotle and similar types of eating establishments, there is a good chance that the menu will show how many ounces of protein are in the dish you are ordering.  Burgers, steaks, chops and fish will often prominently display the amounts of ounces they are selling you.

Ingesting adequate amounts of protein while keeping carbs/fruits minimized are the key to losing weight and losing most of that weight from body fat.  The SP Program recommends a certain amount of protein intake per the phase of the dietary plan the person is engaging in.  Falling below those recommended levels will impede weight loss.

The point: If you are eating meals from the “assembly line” restaurants or fast food places, do not be lulled into thinking you are getting “lots of high quality protein” with that meal.  Those places are much lower in cost than traditional restaurants for a reason…and one of those ressons is that they are sort of skimpy on real protein.

When you prepare meals at home, you will know exactly how much protein you are including with that meal.  However, when you eat out, do not be hesitant to ask:  “Where’s The Chicken?”

Enjoy an oldie, but goodie…one of the funniest fast food burger commercials ever: